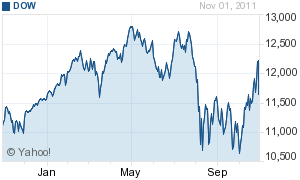 With protesters Occupying Wall Street, understanding the Dow Jones Industrial Average may not be your top priority. But the truth is that your nonprofit’s financial health may depend on how well Wall Street does. Yes, you read that correctly. Read on to learn why…

The Dow Jones Industrial Average (DJIA) is a stock market index that tells us how 30 large publicly owned US based companies have traded during a standard trading session in the stock market. Plain and simple. And that’s all it does.

What the DJIA doesn’t tell you is about the usefulness of these 30 companies’ products or how they treat their workers or the environment. Yet the daily number provides the leading economic news for the country. Sometimes the only economic news.

Originally started in 1896 by Charles Dow and his business associate Edward Jones to represent the dollar average of stocks from a dozen industrial companies —think sugar & tobacco among others, the current listings now include fast food, retailers, entertainment and telecommunications companies. With names as common as Coca-Cola, Exxon-Mobil and Wal-Mart.*

Names that are probably on the top of your corporate campaign lists.

You’re probably saying to yourself, now I really know I don’t care. But you’d be wrong. You do need to care because it’s an indicator of foundation funding, not that all endowed foundations invest in companies included in the Dow Jones Industrial Average. But the fate of those companies has an impact on the fate of those endowments. And the fate of those endowments determines how much money foundations have to grant. Generally foundations base their payout amounts on the average value of their investments during the previous three years. Knowing how the DJIA is faring will help you know when to build or spend reserves. (See August blog, Three Keys To Financial Health)

Only two degrees of separation exist between your organization’s financial health and the financial health of some bad corporate actors. Ironic or twisted? If that’s not enough to motivate your board to do grassroots fundraising, then I don’t know what will.

Sooo don’t touch that dial when you hear the daily report of economic news. Your organization’s financial health may depend on it.

*(Special prize given to the first person who can name the only company that remains on the list since the beginning.)

November might be NaNoWriMo —National Novel Writing Month. Here at Fun with Financials 2012 is…

It’s Time to Thank Your Board Treasurer

Traditionally, Americans take this time of year to reflect on our good fortune. We spend…